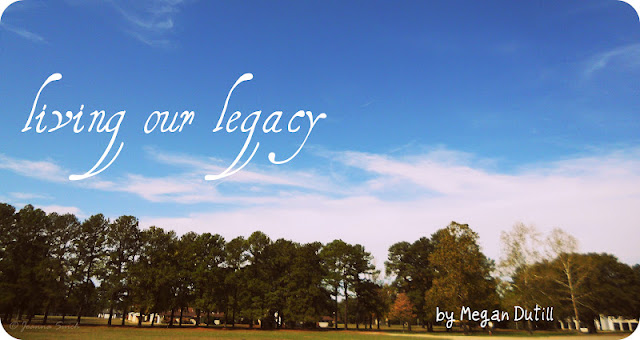 As I read through books in the New Testament, like 2 Peter, James, and Revelation, one thing has been standing out to me. There are a lot of verses exhorting us to not give up, to live with our eyes fixed on the Crown, and to live in expectancy for Jesus' return.

Those are all difficult commands for me, but especially the last one. God knew we would get winded, tired, forgetful, and caught up in the little things of life. That's why He reminds us, so many times (especially in Revelation!) that "time is almost up". But you know, it's really hard for that verse to stick.

I can get it in context of the books themselves; understand the imagery and figurative language, get the message. But what does that command really mean, applied to our lives, here and now? If Revelation, written centuries ago, was stating "time is almost up", that means it could really almost be up now. Or it could mean that we have a few more centuries to go.

But that's beside the point. We'll never, ever be able to figure out when Jesus will come again; that is clear. It's also clear that He'll come when we least expect it - "like a thief in the night." So in the meantime, we are not to be caught off guard.

We are to be expectant.

That's kind of scary for me, because I tend to get caught up in the little things of life. If He came right now, I would be caught off-guard, not expecting it. So how does this really translate into every day life, besides the simple command?

I think it means to live so that we wouldn't be ashamed by what we were doing if He were to suddenly arrive. It means that we have to remind ourselves not to take long life expectancy for granted, because anything could happen. It means we remind ourselves that life on earth is temporary, no matter how eternal it seems from my young, naive perspective. It really is only temporary. And I think it means that we should be living our legacy today. How do we want to be remembered? Most of us probably want to leave something more meaningful on the earth than the remembrance of perennial video-gamer. I don't want to leave the remembrance of a girl who spent all day on the computer behind.

We need to, with God's help and grace, learn to become today who we want to be tomorrow. Continue to try to grow in Him and be like Him, so that if He comes - or calls us - (and it probably will be unexpected), we won't be caught in the lurch, having missed the whole point of our lives. We will have been planning for this, if you will. Those are some thoughts that God's been putting on my heart lately - we need to be "cramming for our finals", even though we have no clue when they'll be. They may be when we're 100, or they may be tomorrow. But we don't want to be caught unexpected.


-- from the archives
megan dutill

Friends Your Age Are Not Enough As author Jaquelle Crowe says, "Yet while having friends of the same age is normal and natural, we miss something special when we don’t have any friends who are of  different  ages than us, particularly in Christian community. Christians share a bond and identity that trumps everything else — job, race, and most definitely age. If there’s no longer Jew nor Greek, slave nor free, male nor female, there should be neither old nor young ( Galatians 3:28 )."   Click here to see the rest! God bless you this weekend! Joanna, Megan, Krista, Emily & Victoria
Read more