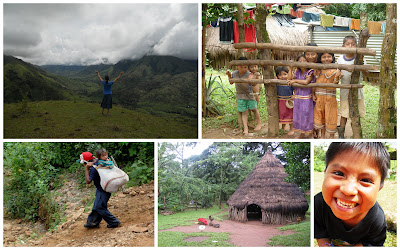 It isn’t exactly commonplace to have a flashlight for electricity, a river for washing, a two hour roundtrip up a steep mountain to obtain cell phone signal, a tent for your house, and mosquitoes for neighbors, especially for five weeks!

Introducing Operation Mobilization’s Mission Extreme (ME) program in Panama! From July to September, I joined the ME team for an adventure of a lifetime. After some training and ministry in the city for several weeks, we ventured into the remote tribe of the Ngöbe Buglé (pronounced “No-bay Boo-GLAY”) people. The Ngöbe adults, for the most part, are incredibly shy and often will not look you in the eyes. One of the major reasons for this is that they have been neglected, made fun of, stereotyped, and mistreated for hundreds of years.

You know what? I only know one Person who can take away all that deep pain and hurt that the Ngöbe have been through. What a privilege it was to bring Jesus – the Hope – to the villagers! Through Him, what was broken and incomplete became beautiful and whole and new life sprang forth!

Now that I’ve been home for several weeks, I’ve been able to prayerfully reflect on my time in the tribe. I’m happy to share some bits and pieces of my weeks...

~
Crazily face-painted with lopsided pigtails and a very colorful costume, Lolita bounced into view. Immediately 50 pairs of eyes turned towards her, watchful and curious. On the outward appearance, she was playing the part of a clown seeking friendship in a skit, but inside she was praying, “Lord Jesus, I pray that You would use this skit to reach many precious hearts. I give it to You.”
~

It wasn’t an actual audible voice, only a whisper to my heart.

“But Lord, it wasn’t on the schedule. Besides, I might choke up with tears and not be able to share.”

I leaned over to our translator, “I want to share a testimony. Can I?”

At her nod, I shakily stood up on the dirt floor in the wall-less church and began.

After I finished, a rare sound erupted from the villagers: firm, loud applause. That could only mean one thing – it had touched their hearts deeply.

“Dearest Lord, it’s all Yours.” I whispered back.
~

Whirling around in a circle at a fast speed, hands clasped, the children screamed in delight. I raised my voice as well and laughed. Suddenly, we happily collapsed onto the ground, a pile of giggles. As we struggled to get up, I looked into each child’s face. Oh God, in the midst of poverty, in the midst of pain, in the midst of starvation, come. Come and give these sweet children new life.
~

Sweat poured down my face as my eight teammates and I trekked through the steep mountains of Panama. We weren’t hiking just to hike. We were hikers with a purpose – to bring the Gospel to the Ngöbe Buglé tribal people deep in rainforests and mountains. Armed with the Word and other helpful resources, we prayerfully visited huts. There was much rejoicing in heaven as the lost became saved!
~

I pray that the Lord will use my little excerpts to touch your heart for the lost and needy in our world and not only that, but that you’ll do something about it!