A letter from Joanna 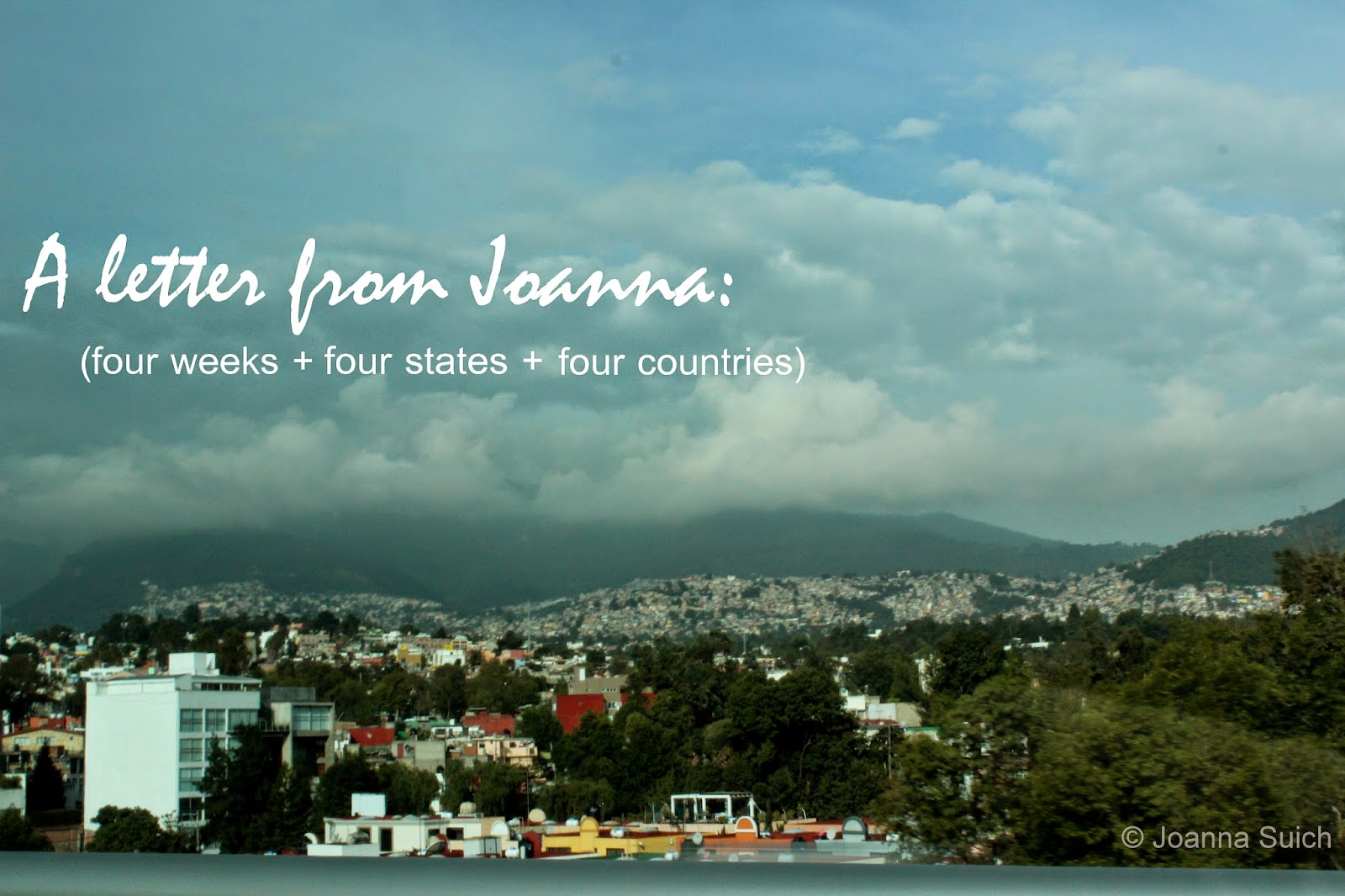 Hope your summer was filled with His presence and His workings in your heart and those around you!  I know mine has been, along with some difficulties, yes, but those things are the ones that press me even closer into Jesus.  It's been a crazy, exciting four weeks where God has taken me on adventures in four states and four countries (thus, nothing here on the blog for awhile until today!).  I actually didn't realize it had been four weeks + four states + four countries until I sat down to write.  Then I realized - wow, God has been taking me on a lot of travels lately!

Taiwan:  The end of July I left the island of my heart and headed for the United States.  The hardest goodbyes were telling my little orphan friends that I was leaving and then my rough boys in the village.  I thought for sure my heart would be completely torn out, but we serve and love a wonderful Father who kept me in His arms during these farewells and in the weeks following.

Once in the plane to the US, little did I know the travel troubles my friend and I would go through in the next hours, including two fires in the plane's galley.  In those initial moments, as the flight attendants scrambled to get everything in control, I just remember leaning back in my seat and giving it all to the One who holds the keys to life and death.  I wasn't frantic or scared as I expected.  Instead that peace that passes all understanding of His swamped around me and I sat there, praying and knowing I was in His hands.

Japan: God is good, always.  Our plane was able to turn around and made an emergency landing in Japan.  When we landed, I looked out my window and was greeted by the intense faces of numerous paramedics, rescue squad, policemen, and airport personnel.  In that moment, I realized how much danger we had been in.  And how my mighty King had kept us in His strong right hand!  After the professionals examined everything and realized we couldn't fly until the next day, the airlines put us up in a hotel near Tokyo and I had the pleasure of seeing some of the country.  That was the bright side and my friend and I enjoyed our time there, exhausted as we were.

US:  A day later than planned, after many delays, I arrived home to rush into my family's arms.  It was such a joyous reunion after being separated for a year - as I was doing missionwork in Taiwan and my family was in the States.  The next days were spent in four different states doing a variety of things and visiting others.  It was a time of great fellowship and joy in the Lord!

Mexico:  Yesterday I just flew in from Mexico where I went for a friend's wedding and did some exploring and praying, too.  My Spanish came out like this the first two days in Mexico: "你好, como estas?  Estoy 很好, gracias!", which made for some hilarious laughs and more than a few bewildered looks.  And some confusion in my brain at what language I was trying to communicate in after using Mandarin for a year and a half.  Thankfully by the third day, the craziness in my head finally began clearing and I could then communicate with my Mexican, Panamanian, Costa Rican, and Guatemalan friends in Spanish.  The wedding of a my friend was such a lovely, spectacular, Christ-focused one that started out with worship.  What an amazing opportunity it was to worship and celebrate with Brothers and Sisters from 10+ countries!

So, four weeks + four states + four countries later, here I am, currently in the States.  What's next for me?  Only God knows all those details for now, and I'm content to do the little things He's called me to and let my body rest and attempt to recover from all the travels and sicknesses I've had over the past months.  The moments come when I'm homesick for Taiwan, for sticky hands to grasp mine, for worship in Chinese, for hearing that precious word, "Teacher", but it's okay.  I rest in Him, because He's good and that's what matters.