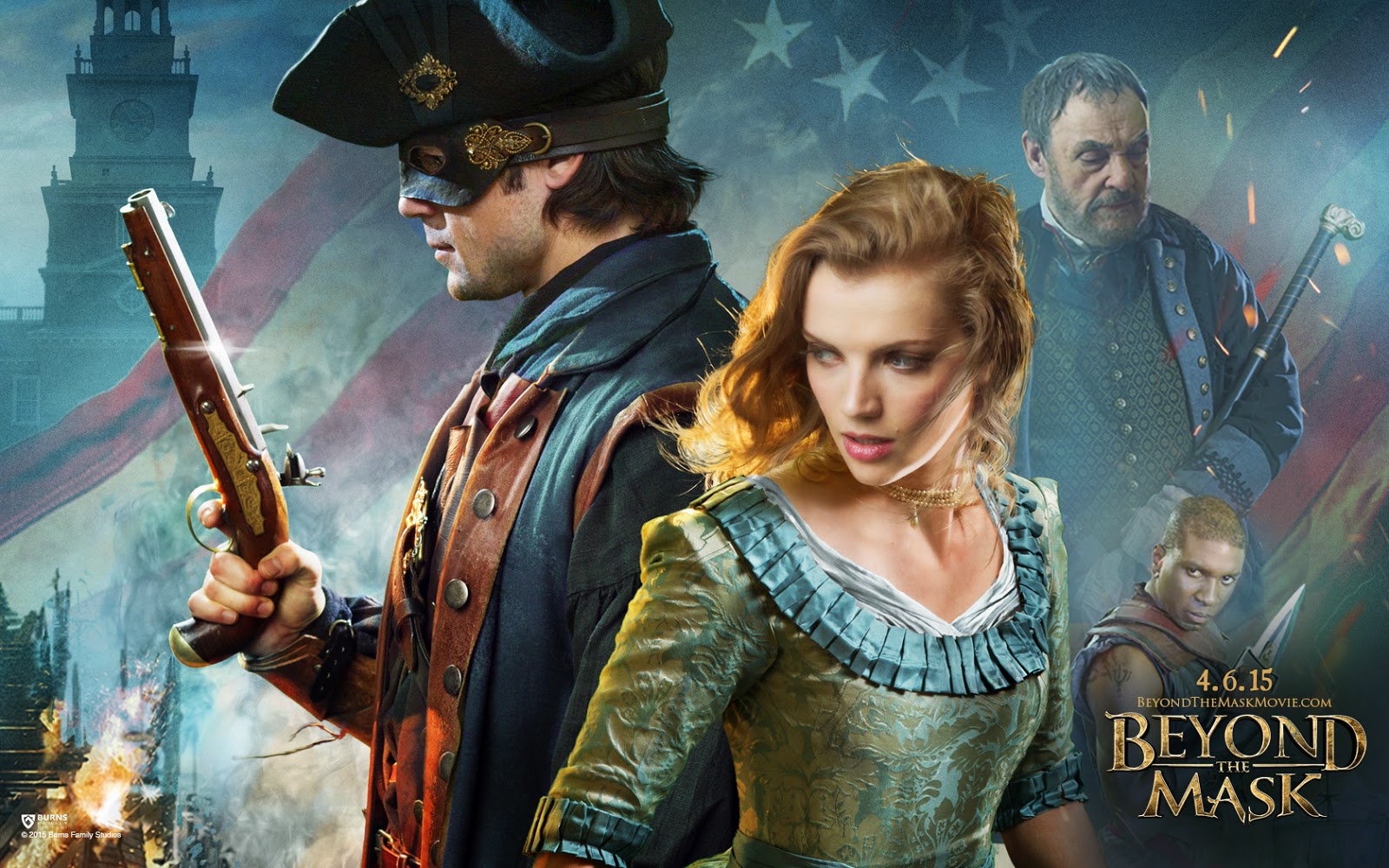 Synopsis:  The leading mercenary for the British East India Company, Will Reynolds has just been double-crossed and now is on the run in the American Colonies. Working to redeem his name and win back the affections of the woman with whom he's never been fully truthful, Will now hides behind a new mask in hopes of thwarting his former employer. As his past life closes in on him, Will must somehow gain the trust and the help of his beloved Charlotte - as well as Ben Franklin - while he races against time to defuse a plot of historical proportions. Coming to theaters Spring, 2015, Beyond the Mask is a revolutionary new family film that brings history to life in a faith-filled adventure celebrating grace, liberty, and the true freedom that can only be found in Christ. (source: Beyond the Mask)

Language:  No foul language is used in this film.

The Good:  There's so much good to say about Beyond the Mask that I know I can't say it all (plus, I don't want to give out any spoilers!).  There's a bit of everything in Beyond the Mask that every good movie needs - humor, a good message, action and adventure, history, romance and a fabulous soundtrack (one that I'm itching to get my hands on as soon as it's released!).  A winner in my book.  You can be sure I've been talking a lot about this movie these days, especially since I had the privilege of pre-screening it recently, and can't wait until it hits the big screens in April!

The Bad:  I couldn't find anything bad in Beyond the Mask.  The script, the acting, the film quality, the message - it's all there in top, Hollywood quality form - except it's better than Hollywood because it has a message of redemption and identity in Christ that is so needed in our day and age!

The Spiritual: The whole movie is a message of redemption and identity - both of which Will Reynolds discovers can only come from Christ.  The Gospel is clearly shown but isn't preachy or in your face.  Instead, the movie takes the viewer along for the ride and lets the message flow with the story.  Very beautifully and tastefully done and theologically sound.

The Verdict:  Go see Beyond the Mask in theaters!  I wholeheartedly recommend this incredible movie and feel that people of all ages and walks of life will not only enjoy it, but also be impacted by it.  May God use Beyond the Mask mightily in our nation!

How You Can Help:  First, buy tickets (see below)!  Second, share the trailer and the website of Beyond the Mask via your blog, website, facebook, twitter, Google+, email and so forth.  We need more amazing, high-quality movies like Beyond the Mask with a message that the world needs to hear.  Please join us and share on social media to spread the word!
Tickets:  Because Burns Family Studios is releasing Beyond the Mask on a theater-on-demand-basis, tickets can ONLY be purchased on their website in advance.  The next two weeks are crucial as to whether theaters across the country and in all 50 states will get the minimum tickets (65 on average) reserved ahead of time and be guaranteed to show the movie.

NO tickets will be sold at the theater.  Please get your ticket today and help prove to Hollywood that wholesome, godly, family friendly movies with Christian values are in demand.

Be sure to watch the amazing trailer below and then purchase your tickets today!

Friends Your Age Are Not Enough As author Jaquelle Crowe says, "Yet while having friends of the same age is normal and natural, we miss something special when we don’t have any friends who are of  different  ages than us, particularly in Christian community. Christians share a bond and identity that trumps everything else — job, race, and most definitely age. If there’s no longer Jew nor Greek, slave nor free, male nor female, there should be neither old nor young ( Galatians 3:28 )."   Click here to see the rest! God bless you this weekend! Joanna, Megan, Krista, Emily & Victoria
Read more