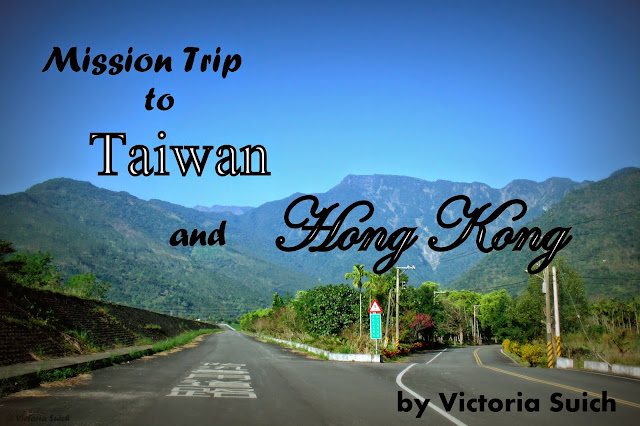 It's crazy to think that it's been a year and a half since I went to Taiwan and Hong Kong on a mission trip! Time has flown by, but I wanted to share a bit more with you all. You can read my first post about my trip abroad here. I also wrote some about it in my last Where I'm At post. While in Taiwan and Hong Kong, we went to four different places and did a program like VBS for the kids while their parents attended a Christian seminar.  Here are a few snippets of my trip that I wanted to share with you:

In one of our first cities, seven-year-old Benjamin and his sister were on my team. They were both such a joy to be around and I loved their spirit. One of the lessons I taught was the salvation story. At the end of the lesson, I asked if anybody had any questions or were interested in becoming a Christian. Little Benjamin raised his hand and his sister piped up that they were both already Christians. I said something like, "Oh, that's great! Then I'll get to see you in heaven." Then Benjamin answered back very solemnly that he wasn't so sure because he would have forgotten me by then!  I laughed.

Susie was a twelve-year-old in one of my groups who knew some English.  She and I just seemed to connect well. For the older kids they had special sessions, and also "homework."  If a child completed all their homework, they received an autographed book from all the leaders of the ministry. Though there was quite a few who were old enough, nobody fulfilled the requirement. Nobody, that is, except Susie! I even remember one time after our program was over that Susie came running up, out of breath, to one of the teachers and handed in her homework. I remember feeling so proud when she received the book at the end during our closing ceremony. Later, Susie asked me to sign her book, and I got to hug her and tell her how proud I was of her.

In addition to having the joy of getting to love the children, I also learned some really important lessons while there. In each small group, the kids were divided up anywhere between 4-16 kids per group, depending on where we were. Each of these small groups had at least one American and at least one translator. Sometimes there was more than one American per group, so one would be the leader, and the other the assistant leader.

As it happened, I was given the assignment of assistant leader for quite a bit of the trip, and more often than others were. I'm not proud to say it, but it really hurt my pride. I thought, "Am I that bad, that they would make me assistant so much of the time?" I should have been focused on serving and loving the kids, but sometimes I would just get upset, twisting the situation around so that in my mind it looked like others didn't like me. In actuality, there were plenty of good reasons that things worked out as they did. I knew in my heart that it shouldn't bother me, that the important thing was serving God, no matter what work I was given. However, I let it all make me feel insecure and worthless. The truth is, titles shouldn't matter so much. But we let them.

This was a hard lesson to be taught, and honestly one that I still need to learn more. Paul wrote some amazing Bible verses that illustrate what our attitudes should be like. Philippians 2:3-4 (NIV) says, "Do nothing out of selfish ambition or vain conceit. Rather, in humility value others above yourselves, not looking to your own interests but each of you to the interests of the others." He then goes on to write how we should take Christ as our example, who became like a servant, humbling Himself in obedience to His Father. This is true greatness, and does not go unnoticed by God.

I'm glad that God gave me this opportunity to go on a mission trip to Taiwan and Hong Kong.  He taught me some amazing lessons throughout my time abroad. Although it wasn't always easy, it was an experience that helped me grow in my faith and gain new perspectives on humility, success, and God's provision.